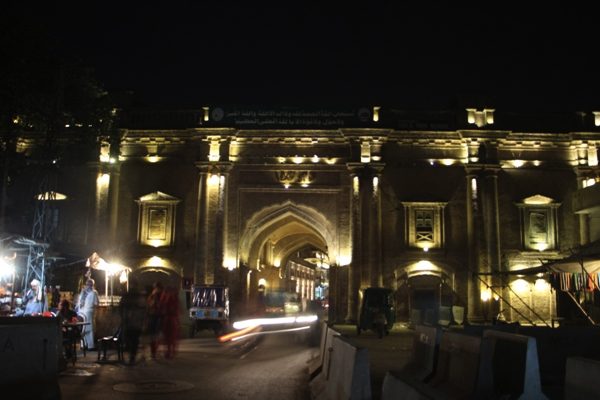 “A little history of this city tells us that Lahore became a dream city in the 1500s when the Mughal Empire settled in Lahore and made it one of the main capitals. Akbar, the Mughal emperor, built a thirty feet high fortified wall around the city with twelve gates”

Many people love Lahore, the city of charms, festivals, vibrancy, life and traditions. This is one of the main cities, which played an important role during the independence in 1947. Over the course of its long history, this city has witnessed many seasons of turbulence and tranquility. It remained a princely state and also got looted during riots. Fortunately, despite several attacks and ransacks Lahore remained in the limelight during different rules and empires of the sub continent. This can be claimed as a city which gave birth to the stories of many writers, scenes for the painters and empires for the rulers. Many stories of independence movement also emerge from Lahore. So in any situation we cannot overlook the importance of Lahore.

This year the Walled City of Lahore is seen decorated with lights, flags and buntings. Such illumination or décor was missing in the previous years. Residents and traders have decorated their own markets, houses and streets. There is a feel of festivity and joy everywhere in the city. No matter how old anyone is; everyone is united to celebrate the 70thIndependence Day. I felt a sense of increased enthusiasm among the people of the walled city this year and they said that it was because of the 70th anniversary of Pakistan. Children, especially, were seen preparing different national songs, and fancy dress shows in their schools. No wonder the Walled City of Lahore is known as a hub of culture and traditions. The best sights were at night while I was walking on the Royal Trail inside Delhi Gate. Delhi Gate itself was illuminated in green and golden lights depicting the colors of our national flag. Almost all the houses had flags on them and it gave me a true national spirit. The Royal Trail up to Chowk Kotwali was also illuminated in the same theme and trust me it gave me goose bumps. This is the same city which went through massive destruction during the partition riots. This is how the time changes. In August this year you can see lights on every haveli, house and monument on Royal Trail. Wazir Khan Mosque and Shahi Hammam have also been illuminated in green and white. Both these monuments are of 17th century. All the existing gates are also being illuminated by the walled city of Lahore authority and this is the first time that such a celebration is taking place. The enthusiasm of the locals of the walled city does reflect the love for Pakistan and also they do remember how difficult it was to have a separate country where everyone could enjoy freedom. If you are looking for true freedom celebrations then you must visit walled city Lahore in these days.

A little history of this city tells us that Lahore became a dream city in the 1500s when the Mughal Empire settled in Lahore and made it one of the main capitals. Akbar, the Mughal emperor, built a thirty feet high fortified wall around the city with twelve gates. A Mori was made during the British era which was given the status of a gate later. Many of the gates have been demolished but almost five are still intact, which were rebuilt during the British era. During the riots of partition in 1947, the gates were damaged and Lahore got a new look.

Lahore today is the cultural capital of Pakistan and one of the largest living cultural centers of the world. One would find generations-old traditions and values in this place and people living in the ancestral homes called havelis. You will also find the narrowest streets of the world inside the walled city of Lahore. The Walled City of Lahore represents centuries-old civilization with contributions by Afghans, Tughluqs, Lodhis, Hindus, Mughals, Sikhs and the British. Remnants of these eras are still found in every street, nook, and corner of the walled city. Amidst all these, we will also find the stories of partition 1947.

Lahore walled city possesses thousands of buildings of architectural merit and historicity but after 1947 the beauty of the city could not be kept intact. The people living in the Walled City still remember the incidents and commotion that erupted during the riots of partition. They say that this place was peaceful and everybody was living happily irrespective of religion and race. In the old walled city Hindus, Sikhs, and Muslims were living in genuine harmony before 1947. The riots of partition brought with it the troubles to the neighborhood relations, heritage, and culture of the walled city.

This is the story of Lahore till 1947. My interest in sharing these facts with the new generation and my readers is to remind everyone about the sacrifices made for Pakistan. Even the heritage was at stake during the riots and heritage did sacrifice. We need to love and respect our country. Good and bad things are everywhere, in any corner of the world. I request the media friends to highlight Pakistan’s positive aspects; it has a lot more than the communal, political and economic issues. Our security is at risk but this is not the end of the world, we need to fight for our country’s safety.

Over the period of time, we ourselves have damaged the image of Pakistan globally. Why do we keep showing the poverty and social, political and economic illnesses on social media, why cannot we highlight the beauty of mountains, the gifts of nature, the achievements of our students and professionals, the rights are given to minorities and the deprived, our heritage and tourism? Pakistan is a land of marvels but the marvelous aspects are not being highlighted. This country is a result of millions of sacrifices by our forefathers. We should end the illogical debates now on the origin of Pakistan — if it was beneficial or not.          We, with our illogical discussions, are misleading the younger generation. Why everyone passing out of an elite educational institution wants to settle abroad? Here comes the role of our teachers. Please teach and inculcate nationalism among the students. My dear readers if love and patriotism are not sustaining among the individuals then this is our fault don’t blame the government for everything, the grooming starts at home, not in the parliament. It is us who have to teach the younger generation to love and revere the country they are born in. this country we call Pakistan needs us, our love, affection, and protection.